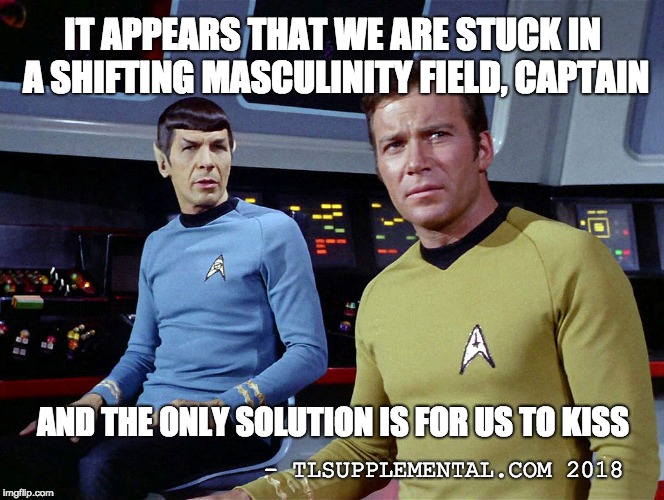 Captain Kirk has a reputation. Mentioning his name in a group, you will probably hear something about  an impetuous leader with a naked green lass in every port. That image is certainly backed up by cultural parodies like Zapp Brannigan and the Star Trek reboots (Yes. Parodies. Come at me, bro.).

But the current cultural idea of ST: TOS is a far cry from what you actually witness on the show, which I found out when re-watching episodes for a possible essay about Spock. Annoyed that my initial concept of Spock as the Enterprise’s ‘June Cleaver’ wasn’t working out,

I came across the wonderful 2017 essay in the online speculative fiction magazine Strange Horizons entitled “Freshly Remember’d: Kirk Drift”. In her 13k+ word opus, author Erin Horakova dives deep into the strange cultural phenomenon of making Kirk something he was not. Whereas in 2018 we have a collective memory of him as a devil-may care leader and womanizer, Horakova’s read points to O.G. Kirk as a sensitive serial monogamist who only dates seriously intellectual career women and feels married to his ship.

So, in order to really, really, REALLY consider the true character of James T. Kirk, we have to take into account the shifting ideas of masculinity in the 50 years of Trek. Horakova brings up excellent point after excellent point about the need for us to believe that society has ‘progressed’ in relationship to the sexes. We don’t want to think that there might have been more fair-minded, respectful, women-positive men on network TV in the 1960s then there are today, so we might be assigning attributes to Kirk to help us feel better. That, coupled with a possible homophobic backlash from the creation of slash fanfiction by female fans of ST:TOS, could have pushed popular memory into the gutter.

Which brings us to the idea of Kirk as caregiver.

While re-watching STII: Wrath of Khan a few months ago, before reading about ‘Kirk Drift’, I was struck by the two scenes early in the film where Spock and Bones give Kirk birthday gifts. At this point, the characters have known each other for two decades, and the gifts feel symbolic of their deep understanding of James T. Kirk. Spock gives Kirk a printed Charles Dickens novel, Bones brings some Romulan Ale and a pair of antique reading glasses.

These are not the gifts that one gives to a playboy. If he were the saucy Kirk of our drifting memory, Kirk’s friends would probably giving him an exquisite piece of  pornography and some real X-Ray Specs (future!). But classical literature and granny glasses? To me, these gifts are indicative of friends who have watched Kirk sit alone for years.

The O.G. Kirk of lore is a man who is self-actualized, living a fulfilling life that utilizes his unique abilities, but understands the price as unending responsibility. He doesn’t have time for sexy flings. Between each challenge, he sits alone to prepare his mind, knowing that he will be called upon to square off against unimaginable foes. He might have to use logic, or sexual manipulation, or brute force – all are equal in his mind as long as his crew is safe and his mission can continue.

Kirk is a man married to his job, and in the films we see him struggle post-captain-hood, the same way we might expect a displaced caregiver to struggle. When an unending task, like caring for a child or a starship crew, comes to a close, it’s hard for the caregiver to know what to do. And that is a normal part of the natural cycle of caregiving.

The Takeaway: Some caregivers feel incredibly fulfilled by their work, to the point where it is all-consuming. As a counselor, I am happy for those caregivers, but am also aware of how difficult the transition will be if their caregiving task ends. The key, I think, is knowing as a caregiver that someday, you might need to re-learn to take care of yourself.

I am a licensed mental health counselor practicing in Seattle, WA. For more info on my counseling, visit: www.compassionateanxietycounseling.org View all posts by Ellen Ross Hodge