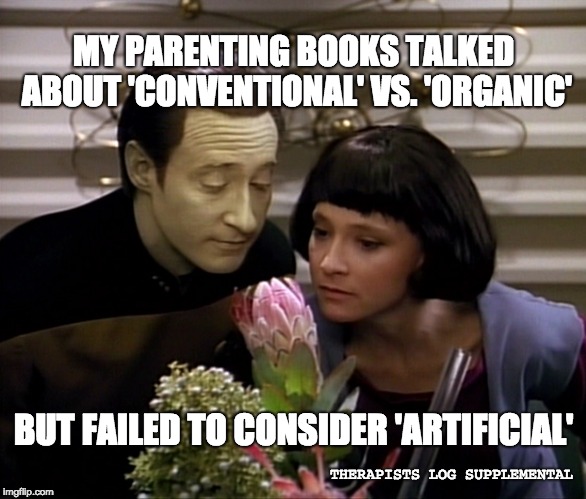 On a show where the captain has a surprise teenaged love child, where the counselor is impregnated without consent by an unsubstantial lifeform, and where the first officer gains a fantasy son via the psychic ‘inception’ of a lonely orphan, Data’s path to fatherhood is startlingly intentional.

Data’s decision to have a child is so sober, so measured and well-thought out, that it seems to shock his shipmates all the more.

Picard is upset, and while he frames his objections as an authority figure, his emotional reaction seems personal. In his scenes questioning Data why, WHY, didn’t Data talk to Picard before creating his child, Picard’s head is buried deep in his hands, his face overwhelmed with emotion. Picard is naked in his displeasure.

I emphasize with Picard in this situation. I think many of us had a friend who we assumed would never have children, and then have to suddenly adjust to them becoming a parent. I wonder if Picard had counted on Data to remain child-free. The rest of the bridge crew might have families – with senior staff like Riker, you know it’s only a matter of time – but Data would never abandon Picard for kids. Picard and Data could spend the next few decades living a Starfleet child-free lifestyle – watching chamber music performances, falling in love with child-free bad-girl babes, and eventually getting matching “Space Bachelors 4 Lyfe” tattoos the next time they zoomed past Risa. Picard could count on Data.

And then he couldn’t. And in his inability to cope, Picard becomes overwhelmed in doubt that his very capable friend can adapt to parenthood. I understand Picard’s predicament, but I think it overshadows something about Data: He’s a fantastic parent.

As a counselor, I applaud Data’s ‘fake it till you make it’ parenting. Though he claims to not feel love, Data is more honest and supportive with his offspring than any parent I’ve ever encountered. He is the model of intentional parenting, consulting every available source and taking the best ideas for his own. He feels guilt at not being able to give his child the emotions that other parents can, but he is thoughtful in choosing mentors who can emotionally educate his child and help her grow. At the end of the day, he approaches his child with such patience and kindness that she thrives.

I am a licensed mental health counselor practicing in Seattle, WA. For more info on my counseling, visit: www.compassionateanxietycounseling.org View all posts by Ellen Ross Hodge